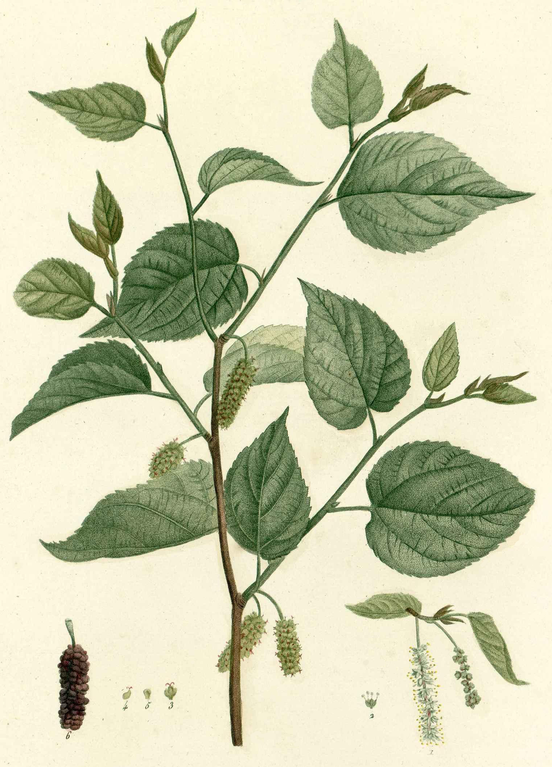 The Baltimore Orchard Project has a special affinity for mulberry trees.  In 2014, we launched the Mulberry Madness campaign to raise awareness of this delicious food, its nutritional value, and its history. While the tree produces delicious and versatile fruit early every summer, most people in the United States see the tree as merely an annoyance. It expands rapidly and is considered invasive. Worse, it drops its fruit on the street attracting all sorts of pests. In the interest of changing the perception of the mulberry it is useful to look at its storied history in the United States. Previous culinary uses as well as emerging interests from Middle Eastern immigrants and foragers suggest that the Mulberry may well be on its way to a renaissance.

Two varieties of mulberries are common throughout the Eastern United States. The two varieties, red and white, have separate histories. The red mulberry is native to the United States and has been enjoyed for centuries. In the mid-1500’s Spanish Conquistador Hernando de Soto noted Muscogee peoples of the Southeast United States eating the fruit dried.1 Native peoples also mixed the berries into cornbread, made dyes and used its branches to make bows. White mulberries are comparatively new to the United States. In 1733 General Oglethorpe brought 500 white mulberry trees to the then colony of Georgia.  His intention was not to produce fruit but silk. White mulberry leaves are the preferred food of silkworms and landowners at the time wished to create a silk industry in the United States. In 1773 American naturalist William Bartram wrote that every landowner in the colonies was required to grow white mulberries, highlighting the widespread popularity of the silk experiment.2 Thomas Jefferson reportedly had the trees planted every 20 feet at his home.3 Silk later proved to be a failed industry in the United States. However, the trees continued to thrive. White mulberries are now common and in many cases are so invasive they encroach on native red mulberry trees.

BOP staff during a mulberry harvest

Despite these histories mulberries are no longer a common fixture in the American diet. Recent Middle Eastern immigrants may be changing that. Mulberries are still commonly consumed throughout the Middle East, and many immigrants already familiar with the fruit are foraging trees throughout the Baltimore-Washington region.4 Since the dried and often imported fruit commercially available is often expensive, foraging offers a free food with a taste of home and the added benefit of nutrition.

Due to the mulberry’s thin skin it is unlikely that the fruit will become widely commercially available anytime soon. Luckily, mulberry trees are easily identified and harvested for free. Foraging the fruit presents us with the chance to expand our palettes and transform our conceptions of what would otherwise be known as a nuisance tree.

If you are interested in learning more about mulberries please join us for our Mulberry Scout About in https://www.meetup.com/Baltimore-Orchard-Project/events/239855317/