With over 80 orchards showing up in the atlas, I was both excited and slightly overwhelmed with how I was going to find out more information on the owners themselves. In all honesty, I had no plan. And so, I did what any young, smart, up and coming professional researcher does during moments of uncertainty: I made a spreadsheet.

About halfway through logging the names, neighborhoods, and roads surrounding all the orchards on the map, I still wasn’t sure how I was going to find more information about the owners of these orchards I knew existed. As you can see, a lot of the first names of these people were abbreviated. 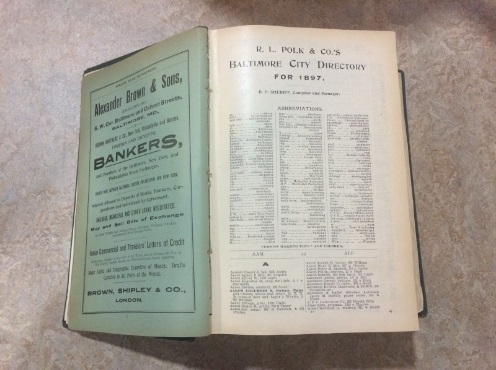 But then, I suddenly remembered that there used to be this ancient form of technology called a directory. That’s right. The library at John’s Hopkins University is home to dozens of old Baltimore City directories from the past century or so! A quick email to the library services department, and a copy of one from 1897 was on its way to where I was working.

After some cross referencing between the directory and the atlas, I was able to confirm the first names of most of the owners I had found.

My next instinct was to try checking out some of these newly confirmed names on search engines and genealogy websites. I quickly noticed that in some cases there was a lot of information about an owner and his/her family (especially when that person/persons were actively involved in Baltimore business and society), in some cases there was nothing.

Here are some biographies on a handful of orchard owners that I found most interesting! 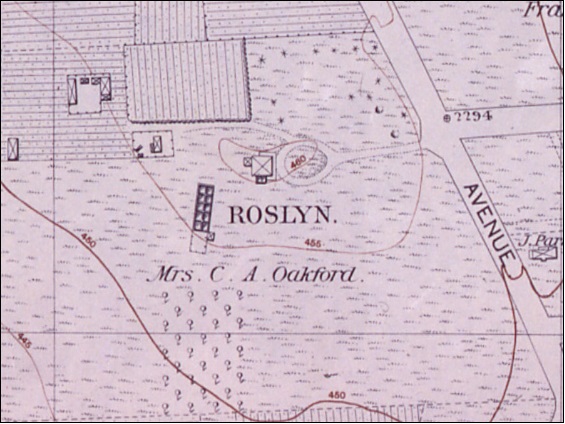 Born Emma Augusta Zollinger, Mrs. Charles A. Oakford lived on a beautiful property known as Roslyn in what was then northwest Baltimore. Her husband passed away in 1878, and together they had five children.

Described as “a most estimable lady” in a book I found online titled History of Baltimore, Maryland, from Its Founding as a Town to the Current Year 1729-1888, Emma and her husband Charles were very well respected in the Baltimore community.

Charles, a Quaker, was elected as a County Commissioner (most likely representing the West Arlington neighborhood, where they lived) many years in a row, and was “a man of sterling qualities, respected and trusted by all who knew him”1. The property on which they lived was roughly twenty acres, and known by the community as a place of “taste and refinement”1.

The image above shows the orchard neatly planted next to what appears to be a rather large greenhouse. Their house is located at the end of a long circle driveway, and there is a decent amount of cultivated land seen at the top left corner of the map image. The surrounding area was filled with large farms (most likely growing cash crops such as corn and tobacco), beautiful forests, and a large number of private orchards just like this one!

Located just under the city’s northern boundary line (established 1888), the Oakfords resided in the heart of what was then the rural outskirts of Baltimore. Their story represents what we think of today as easy country living: close enough to the action that was going on downtown, but far removed from the hustle and bustle of city life. 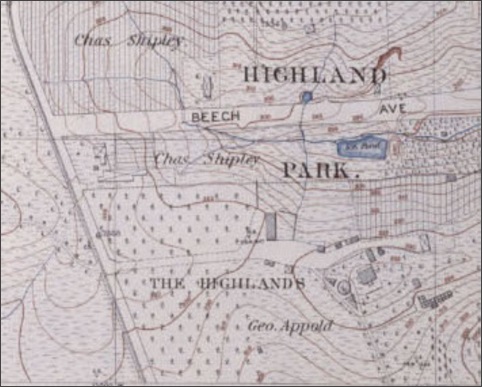 A couple page turns later in the atlas, and my eyes couldn’t help but fall on what looked like an extremely large orchard next to the name Geo. Appold.

Located due south of the Oakfords and still within the rural outskirts of the city, The Highlands property was most likely owned by George Norbury Appold, grandson to one of the most influential family names in 19th century Baltimore business.

George Appold the First (George Norbury’s grandfather) opened up a leather manufacturing and tanning company in Baltimore around 18122, which was eventually passed down to his two sons Samuel and George Julius Appold. 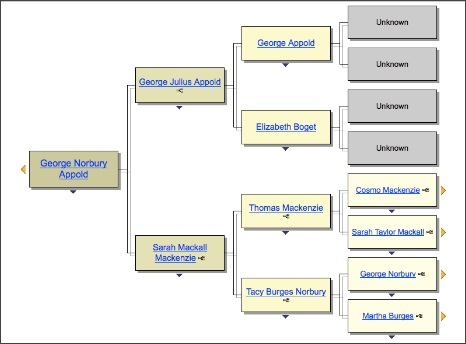 Both sons were exceptionally business savvy, and helped turn Baltimore into a leading competitor in both the leather and steamboat industries of the 1800s. George J. paved his way to becoming “one of the enterprising improvers of real estate in Baltimore…owning excellent properties in several different parts of the city”2.

Those familiar with the history of Baltimore architecture might recognize the family name from the historic Appold-Faust building located at 307-309 West Baltimore St. First owned by George J., the building is one of the longest standing cast-iron fronted buildings in the city and has survived many hardships, including the Great Baltimore Fire of 1904.

I was absolutely amazed with all of the information on the Appold family, and with their contributions to the business and economy of 19th century Baltimore. if you’re interested in learning more about their legacy please check out the following links:

One of the goals I’ve set for this post has been to showcase the different types of people/families who owned an orchard during the late 19th century. So far we’ve seen what I consider to be two ends of the spectrum: a simple, rural family (The Oakfords), committed to both their faith and community; and, a family of businessmen (The Appolds) dedicated to enriching the economy/commerce of Baltimore City. Both owning an orchard!

From somewhere in between, or perhaps from an entirely different scale, is a third orchard owner I’d like to highlight…

Don’t be deceived by the image above! What was documented in the 1897 Atlas as the Johns Hopkins University Grounds was not entirely true. According to the university’s library website, aside from a handful of athletic fields “the Clifton grounds were never utilized by the University”3.

Originally owned and operated as a farm by a man named Henry Thompson, Clifton Park has a long standing relationship with social and environmental stewardship. A wonderful timeline can be found here, which starts off saying how Thompson began establishing orchards and cultivating crops as far back as the year 1799! 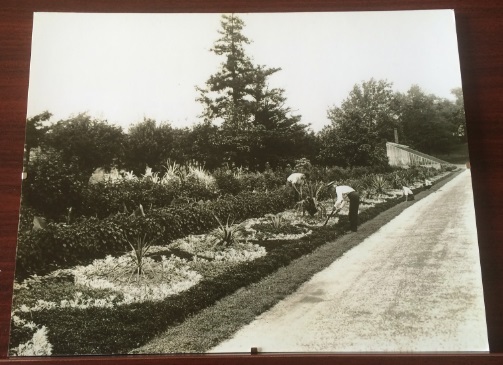 The property was purchased by Hopkins in 1841, who “immediately set about reinventing the place in the fashionable style of the day”4. As part of that reinvention, the new owner made sure, along with the help of a private gardner who’s cottage can be seen in the atlas, that the aesthetics of the grounds were both elegant and functional.

“In addition to updating the house, Hopkins reworked the grounds into an Arcadian landscape, complete with planned vistas to the harbor, winding drives and paths, a porter’s lodge, gardener’s cottage, orchards, crops, and parterre gardens”5.

A conversation with John Ceikot from Baltimore City Civic Works enlightened me to how special it must have been for a professional gardener to live and maintain the Hopkins era grounds. Below is a stunning picture of the gardener’s cottage (taken 1957) that John shared with me from the Clifton archives. 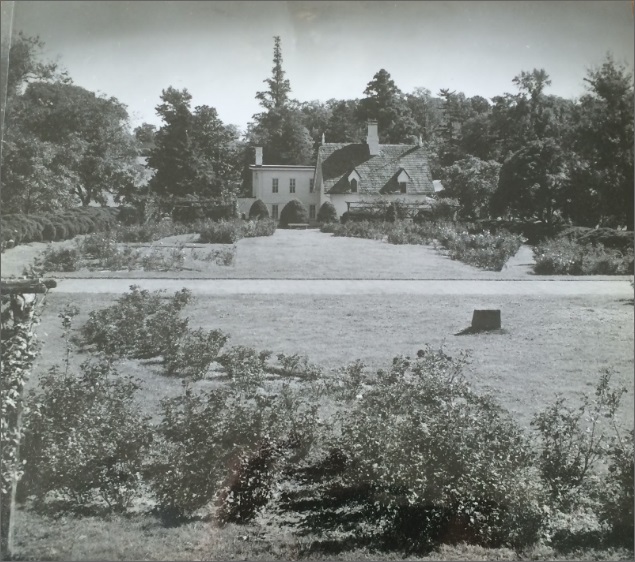 What I think is truly amazing is the fact that orchard care and food cultivation have been been happening at Clifton Park for over two centuries. From the trees planted by Thompson around 1800, to the landscape reinvention of Hopkins, to the Clifton Park Food Forest being cultivated right now by Charm City Farms!

For more information about touring/getting to know the history of Clifton Mansion and the surrounding grounds, send an email to the following address and/or check them out online:

What an amazing journey it’s been researching these three very different yet humbly connected orchard owners from the 1897 Atlas. It goes to show how caring for fruit trees has no boundaries.

Stay tuned for next week’s post on Orchards Then & Now to see where the city’s edible canopy is in 2016, and how just like 1897, all kinds of different people are caring for and enjoying the taste of a home grown apple this very minute.