As I finished last week’s post and started drafting this one, I couldn’t help but wonder what a conversation between the 1897 orchard owners and a group of orchard owners/caretakers from today would sound like. What would they talk about? Would they share recipes? Discuss different apple cultivars?

How would the Oakfords, Appolds, and 19th century gardeners from Clifton Park respond to issues such as food insecurity in Baltimore? What would they have to say about ‘food deserts’? I imagine they would be quite shocked to hear that 1 in 4 of the city’s residents don’t have easy access to fresh, healthy food.

When researching what life was like for the late 19th century orchard owner, I have found that a lot of the problems our city (and world) face today regarding access to healthy food can be traced back to the changes happening within the mid to late 1800’s.

For example, in 1790 the total population of America was 3,929,214; and farmers made up approximately 90% of the labor force. A hundred years later (1890) the population count was at 62,941,714; and farmers made up only 43% of the labor force1. That alone could be the start to an answer. For those interested in seeing how those figures turned out over the next century, check out this link.

Even more shocking is what was happening to thousands of different fruit varieties during this time. According to a publication from the U.S. National Park Service, “The modern era of orchard fruit growing from 1881 to 1943 is characterized by increased technological development of the orchard and a dramatic decrease in the number of fruit varieties.” In other words, as the ways in which orchards were being grown developed (use of pesticides and insecticides, shift over to smaller/more productive trees etc.) the art of cultivating new varieties began to disappear.

Also, as small time farmers/orchard owners began to move into other industries (alongside the Industrial Revolution), advances in technology and manufacturing processes helped standardize/commercialize fruit growing. “Approximately 50 percent of the fruit trees that existed in 1880 were gone by 1930, though the great paring down in the number of orchards was paralleled by a rise in specialized, commercial orchards, managed by growers [companies] rather than farmers.”2

All of this reading about the struggles orchards have gone through over the last century and a half has made me appreciate working with BOP even more. Knowing that it only took a handful of decades before the art of privately owning an orchard disappeared almost entirely, I feel hopeful that as a community we can help turn that around over the next handful of decades.

One of my favorite memories throughout this internship was having the chance to see in person some of the orchards BOP currently has a relationship with, and meeting some of the people who are connected to the movement and passionate about fruit tree care.

Cultivating and maintaining an orchard is a truly special experience. It brings people sustenance and joy, connecting them to the land and neighbors in their area. Urban orchards become places of not only for growing fruit, but of community gathering and neighborhood cohesion.

From churches, to schools, to community gardens, and even a median within Callaway Avenue- the fruit tree energy is buzzing! Everybody is so positive and excited to share their stories. Here is a summary of some projects I had the chance to see/talk to:

I had the pleasure of speaking with Mr. Alonzo LaMont Jr. from the Callaway Garrison Improvement Association about the apple orchard planted in the median strip on Callaway Avenue. When they started, there was no neighborhood association and the trees were dilapidated. Through the process of coming together to steward the trees, members of the group decided they wanted to start the neighborhood association to address other issues relevant to their area.

After the success of the project, Mr. LaMont had found out that someone from the first wave of the Association had planted the trees about 25 years ago, but at first he wasn’t sure who. Through reaching out to an old member of the past community association, it was revealed that his very own father Alonzo LaMont Sr. had planted the trees! To continue the tradition, Alonzo, the Callaway Neighborhood Association and Ashburton Neighborhood Association partnered with BOP to plant 4 new trees in the median. Just hearing this made my eyes water. This is the true essence of fruit tree growing. 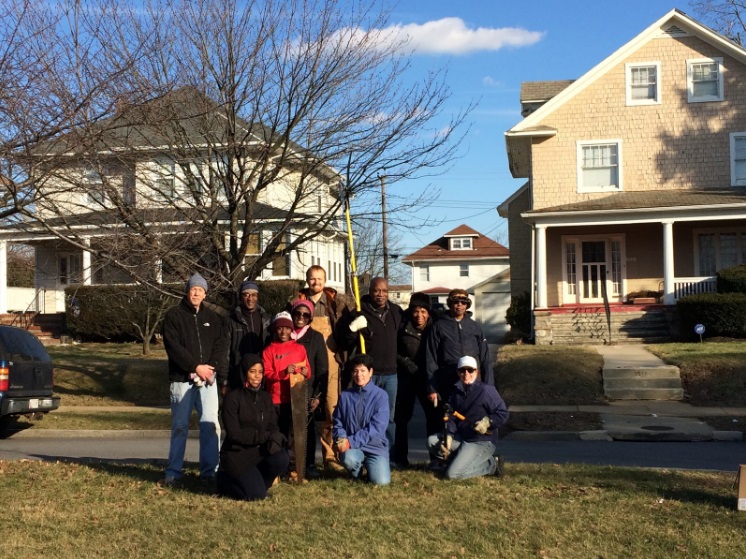 Traveling further back in time, the land where the Callaway Apple Orchard is planted has a legacy of orchards.Through my research on the 1987 Geological Survey I found that the Ashburton Neighborhood once had 4 large orchards in the general area, including the Jno S. Gittings family and the Oakford family covered in Blog 3.

Be sure to drive by some day to enjoy the scenery! And this fall come check out their 2nd annual Apple Orchard Festival, taking place on September 25th.

Located in the historic Union Square community of Southwest Baltimore, Steuart Hill Elementary will be partnering with BOP this all to plant both fruit and nut trees on the school’s grounds. The tree planting is a joint community/school project led by Union Square Association President Bif Browning, and Steuart Hill’s Community Liaison Arounda Riley.

What’s really exciting about this project is that the school will be starting a Green Team program for the kids to gain valuable hands on experience in the new school orchard. In the program, the kids will learn about the importance of trees for our environment, how to plant/care for them, and about different kinds of fruits and nuts‎.

Before Steuart Hill Elementary was built, it was the site of The House of the Good Shepherd, a covenant and home for wayward girls from 1864 until 1964. While talking with Bif about the project, he said he had been told there ‎used to be fruit and nut trees there during this time.

With luck, Bif was ab

le to get in contact with Sister Mary Regina from Good Shepherd Services. She graciously went through old records/notes from when the House of the Good Shepherd acquired the site (originally Willow Brook country estate) from descendants of John Donnell, whose family had also donated the property that became Union Square Park.‎

Looking through the records we found that, “The old dwelling given by Mrs. McTavish for a House of the Good Shepherd, was built in a style rarely to be met with at the present day. To the south and west of all the buildings there was a large lot of ground, containing some apple, pear and cherry trees.” According to local lore, the property used to be opened up for the community to harvest the remaining fruit at the end of each season. When the new orchard gets planted at Steuart Hill Elementary School this fall, the students will have a chance to learn this history and be apart of its recreation.

We also discovered that there were nut trees growing on the property, “There were now within the enclosure some grand old trees; among others, two beautiful hose-chestnut trees, standing about eight feet apart, with their tops toweri

ng a distance of sixty or seventy feet from the ground. In the spring, when covered with blossoms, they appeared like two immense bouquets.  In the hottest summer months there was always shade beneath their lowering branches…” This landscape was obviously remembered fondly and although greatly changed has the potential to once more become a place of refuge and enjoyment.

These quotes from the property purchase ledger of the House of the Good Shepherd give me lot of inspiration! Imagine if as a community we can continue finding information on historic orchards in the city, planting new trees in memory, and increasing both Baltimore’s historical culture and edible canopy at the same time.

The Steuart Hill project is an excellent example of orchards then and now. I look forward to seeing all the new trees that the school, community, and BOP plant this season. Check out this hand drawn map of the orchard to be!

I’ve had an amazing time working on this research project as part of my internship with BOP. And the best part is this is just the beginning! As the organization moves forward, we hope to continue building relationships with orchard owners in Baltimore city, while also staying in touch with the history of fruit and nut trees in both our community and the country in general.

There have been several more leads regarding past orchards in Baltimore. For example, I have heard rumors that some of the old breweries used to have fruit trees planted as part of their operations. This could be an entire project on its own!

Meanwhile, I will be working on a compiling all the resources I’ve tapped into while writing these blogs so that there can be a fluid and productive continuation of what’s been started. For anyone interested in talking more about orchard history please feel free to email me at the address below.

A long term goal is to start a regular gathering in the city where fellow historians/researchers can meet and discuss different possibilities surrounding the History of Orchards in Baltimore City. More on that to come!

1Growing A Nation: The Story of American Agriculture https://www.agclassroom.org/gan/timeline/1880.htm