What I expected to see and what the librarian at Hopkins ended up showing me were entirely different. In my head I imagined the old map would be a single sheet of modest size and shape, show the major roads of Baltimore at that time, and make note of its topographical layout via contour lines and small symbols. You should have seen my face when the librarian pulled out a 40×40 inch beautifully bound, multiple page, hand drawn atlas via lock and key. 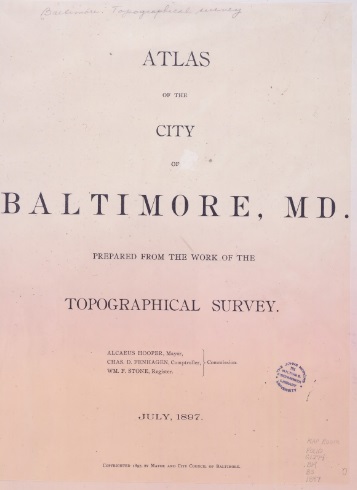 This amazing resource was the end product of a three year topographical survey commissioned by the mayor of Baltimore during the years 1893-1896, and chief engineered by a man whose name appears on the atlas as H.T. Douglas.

All of the data from the survey was collected entirely by hand and foot. No aerial information, no computers- cartography at its finest. In the atlas you can see dozens of field stations the engineers used to help measure exact distances between landmarks etc. Some of the topographical data such as land contour and drainage area, for example, were collected in partnership with organizations such as the Sewerage Commission of the City of Baltimore.

Once enough information in a given ‘quadrant’ was collected, survey data was then handed over to the artists for the official drawing of the maps. This final stage of the commission was an incredible venture, unmatched by today’s process of plugging numbers into a computer and waiting for the product to load.

The index of the atlas says it all. It shows the city of Baltimore split into roughly 30 separate quadrants, each of which is featured as it’s own zoomed in sheet within the compilation. A legend appears at the bottom of this index, and as promised, a special symbol was given to represent all of the orchards that were growing at that time. After many hours of study, I hav 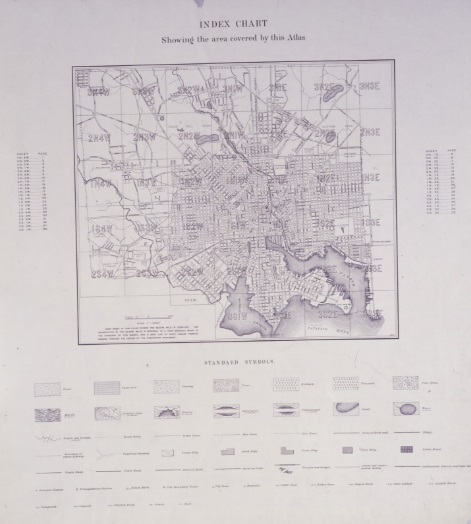 I couldn’t take for granted how amazing this resource ended up being. Along with the incredibly detailed topographical information mentioned above, the artists also included the names of all of Baltimore’s property owners at that time. What an exciting lead! This meant I could see who actually owned these orchards.

What if I took my project a step further and started researching some of these names? What would I find? Would I be able to discover a little bit more about who they were, and possibly what they were growing? Stay tuned for next week’s blog post highlighting some of the orchards and their owners!